Happy to be participating in the Rethinking Marxism Conference at University of Massachusetts in Amherst, MA with my fellow members of The Pedagogy Group.

Very excited to be participating, with video and performance, in an event by Simon Leung.

Simon Leung: ACTIONS!
In our age of precarious work, what is the role of the “art worker?” What constitutes an “art action?” Using conventions of workers’ theater, academic conference, vaudeville, and postmodern dance, ACTIONS! gives thought to these questions by looking again at moments when “actions” were directed at the Museum of Modern Art: in 1960/70s by groups such as the Art Workers’ Coalition and Guerilla Art Action Group, when art activism was tied to civil rights and anti-war movements; and then in the year 2000, when members of the Professional and Administrative Staff Association (PASTA) at MoMA, which included curators, librarians, sales staff, editors and others, staged a four month-long labor strike. Originally inspired by the 2000 strike, ACTIONS! also returns to the recent past of the last two years, when protests in the art world by activist groups such as Occupy Museums and Occupy Wall Street Arts & Labor bring to bear the conditions of working in the art world today. Among collaborators reconsidering the intersection of art, labor, community, and politics today are union members, museum workers, activists, and artists, including Yvonne Rainer, Arlen Austin, Kabir Carter, Benj Gerdes, Sasha Sumner, Pat Catterson, Marina Urbach, Valerie Tevere & Angel Nevarez, Beth Whitney, Chris Kasper, Julian Tysh, Carina Evangelista, David Kelley, Filip Noterdaeme, Lumi Tan, Marcus Civin, Burns Magruder, Benjamin Young, W.A.G.E., and Andrea Fraser. Saturday’s performance concludes with a live discussion among participants including Leung and Julia Bryan-Wilson, moderated by Tim Griffin. Admission is based on MoMA policies in the year 2000.

The public, all ages, are invited to participate in a spontaneous game of hopscotch. On a scale of 1 – 10, what is your state of happiness now? A snapshot will document your happines-self-evaluation immediately after play. The activity, which could cover an entire city block, is a playful reminder of the youthfulness hidden in all of us. Night-time video projection on the street will feature highlights.

In the 1940’s, at age 17, Jacqueline Bouvier (Jackie Kennedy Onassis) wrote a series of love letters to her then Harvard boyfriend, R. Beverly Corbin Jr.
Jackie’s letters reveal precocious and forthright notions on love and family relations. Recently the letters were sold for $13,450 when they were put up for auction by Corbin’s son.
facebook.com/NorthsideFest. 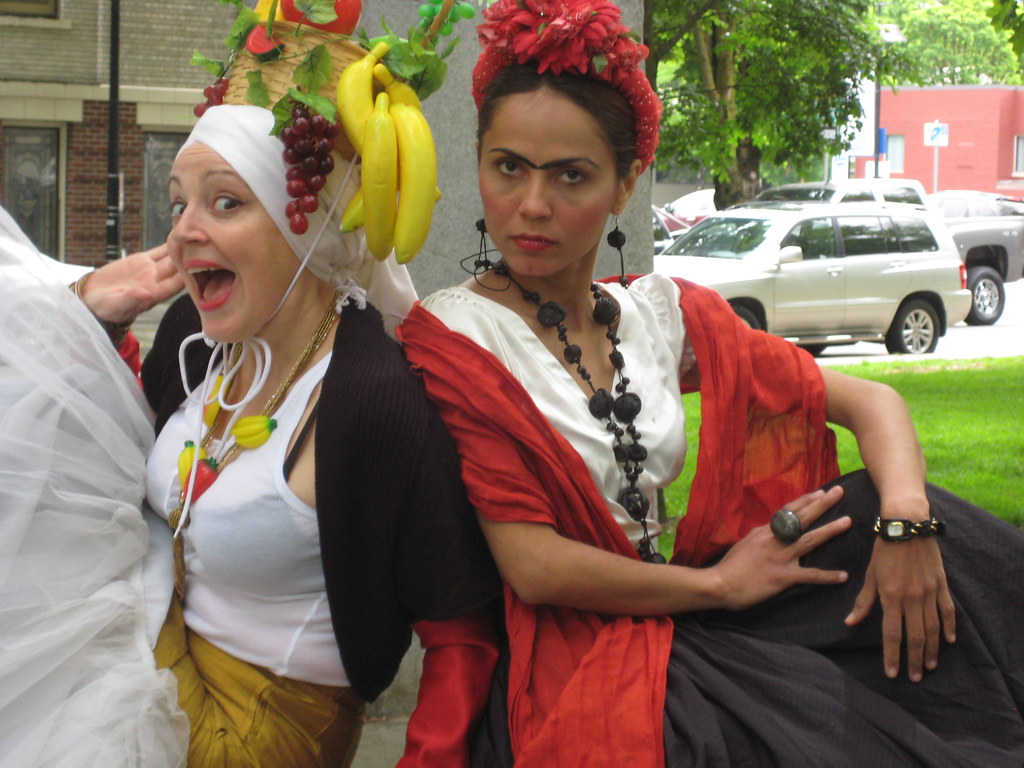 In this performance art piece, Sasha Sumner and Nadia Menco
channel the iconic figures of Frida Kahlo, Carmen Miranda,
and Billie Holiday in a contemporary setting.  As living spirits
of our time, these characters engage in a series of both large
and small gestures where sense of time and place are shifted,
where the past meets the present.  Music and video projections
are featured including clips from Occupy Wall St.

Since last post there’s been another ‘regime change’ or ‘new way’ at the census HQ, the third since when I started.  These changes have had an unfortunate trickle down effect.  This means that the rules about filling out the forms have been changed again.

Whereas, initially, if we got the full, correct information from a direct home-dweller interview on the first try that was acceptable, then with the second HQ regime, maybe due to the great urgency with which to re-do the enumerating that was fraudulently done initially, see the published wrongdoings, it was acceptable just to get an apt population count from a neighbor nothing more, then on this third regime change, it’s only acceptable if the information is collected on the fourth try, regardless of whether all info was obtained on a first try, and get it done in 3 hours.  That means more extra time/work- in some cases unnecessary!  And more info that is not gotten because time is too short to properly collect it.

Since the Brooklyn Census debacle occurred, there has been fallout that workers and residents have suffered from.  Residents are STILL pissed off for having given the information numerous times, enough is enough!  This will make the next phase of the Census work (confirming specific cases) even more difficult, oh dear!

Yet, I succumb to the national zeitgeist of our times- feeling that attitude that comes from knowing employment is down.  With the Census, godammit, at least it’s Work! even if angry residents give you grief.  Co-workers are friendly thank you and oh, it’s a temporary job!

Fraud trickle down = more streets and more pissed off residents

Though we had been told that the job was finished before, actually we had to work a lot last week, to re-do the enumerating- the busy bees like me are paying for the faults of those managers that got fired I guess.  I got stationed all over the place in Brooklyn, sometimes in the beautiful brownstones of Bed-Stuy and sometimes in other neighborhoods, Bushwick-Bed-Stuy like, that are wanting more.  Wasn’t feeling well on the last day of pounding the pavement in the 98 degree sun, smell of urine and garbage says enough.

Was thinking though, that I really got to see how different people live, block to block changing, walking around for hours you can really see what kind of shape everything’s in.  Most people just stick to a few familiar neighborhoods, of friends and events and that’s it, so, we just don’t really know this city.  Brooklyn is vast!

Some residents said that they’d already given the info 4 or 5 times already and were really pissed off.  The job was much more difficult dealing with angry fed up people who then refused to do it again.

Was supposed to get info on a basement address.  No doorbells, just an unpainted flimsy door and an open window, very dark inside, music blasting.  All I can say is Unconfirmed Illicit Activity.

At the end of the day we have to hand in our cases.  Everybody has to spend at least half an hour erasing the bogus information that was written on the forms previously, and filling in any info we got.  We used to meet in a community center that was nice (in photo) but it’s closed now so everybody has to meet up in McDonalds or Burger King.

Do you think more Census workers have purposely faked questionnaires?

Two Census Bureau managers from a Brooklyn field office were fired after their bosses found they faked household surveys to meet deadlines, the Daily News learned.

Instead of pounding the pavement and knocking on doors, the corner-cutting people-counters mined the phone book and Internet to make up answers to questionnaires, regional director Tony Farthing said.

The managers – turned in by whistleblower employees – were caught last week. Now, at least 10,000 surveys need to be done or redone, officials said.

Census officials in Washington only admitted to a string of incomplete forms and poor tracking in disclosing the firings Friday afternoon. But Farthing corroborated worker accounts to the Daily News that managers Alvin Aviles and Sonya Merritt began dummying up responses in the final crush to finish the surveys, which field workers are supposed to compile from in-person household visits.

“Basically, people were being asked to forge [questionnaires],” said one worker in the North East Brooklyn office, which covers 95,000 households.

“We went in and did a full investigation,” Farthing said. “We found out two managers on the weekend of the 12th of June cheated by using phone books or Internet sources.”

A worker told the Daily News that when field interviewers returned to the office with blank forms, Aviles also enlisted some of them in the scheme. “He had people fill them in,” the worker said.

Aviles and Merritt could not immediately be reached for comment.

Farthing said he believes the branch’s earlier work is kosher, but the pair decided to break the rules at crunch time when they were looking at a huge stack of unfinished surveys, and their bosses were pushing for results, even if it meant more night work.

“We were telling them to go back on all non-interviews and hit this stuff hard. None of this 9-to-5 stuff, go when they know someone will be home,” Farthing said. It was then, Farthing said, that the managers “came up with the bright idea, or not-so-bright idea” – to save time.

The Census bureau was not able to estimate how much it will cost to redo all the work, but a spokesman said it was not an issue because the bureau was under budget on the massive project. Farthing said the honest workers left in the office are redoing 5,000 or so interviews that may be tainted.

“We’re not happy about what happened,” he said, noting that Aviles and Merritt were turned in by the very people they trained.

I ran into a random census worker in Manhattan, she had the bag with the logo.  I said, they’re closing out Brooklyn, as far as I’ve been told.

Not so in Manhattan!  But, I thought Bk was the worst- nationally!  Shouldn’t we be finishing last?  I kind of wanted Brooklyn to be the worst, somehow, a sardonic claim to fame.

Was thinking yesterday, being a census worker is like being a social worker, or a quitting smoking adviser, or a diet coach, or an addiction counselor.  The neighbor, the client, the smoker, the victim, the addict, needs to be convinced that they are giving up info, resigning to give up afflictions, for the sake of their own good.  If they do it for themselves, for their own districts’ good, then they are on easy street.  But the ones with suspicion, lack of trust, paranoia, even uncalled for anger, are more difficult to convince.  There’s a mental game going on, on each door step.  Understandably, lack of trust is natural in our criminal world of identity theft, just as it is when living in an unhealthy or dysfunctional environment.  Yet, in the job of the enumerator, you have to trust, to trust that the info is confidential and that it will be treated right, otherwise how could you do the job convincingly?  Fortunately there is ‘hope’ for more than 50% of clients, or maybe those are the ones just more easily brainwashed!

-a busy bee worker, signing off.